Oli (Judo Brown Belt) accompanied me again this week for another BJJ session and we arrived around 7.50, 10 minutes early. Ricardo got us all warmed up by doing various breakfalls and shrimping across the mats before we settled down to do some light stretching.

The class started with some techniques which is different to how it’s usually structured on a Tuesday. The first technique was a defense from a double leg takedown attempt which basically involved me sprawling and pushing down on Oli’s back and taking a grip around his back and under his chest. Oli then isolates my right arm by pinning it with his left arm and then by keeping his head in contact with my body he reaches his right leg across his body and scoots out before taking hold of my back. We both practiced this technique for about 15 minutes before Ricardo had us try a variation whereby the person defending the takedown gets an underhook with one arm, which is the best way of defending. Again we practiced this for a while until it was really drilled in and by this time everyone was really working up a sweat.


As there was a lot of people in the class Ricardo split the class in two and had half of us sparring for 3 minutes while the other half rested and then we swapped over. This went on for over an hour so I must have sparred for about 40 minutes.


First up I rolled with a blue belt and we went at it pretty hard. He was able to get the better of me choking me out with my gi a couple of times in the 3 minute period. Next up for me was Dan a Brown Belt and he totally blitzed me getting 4 or 5 arm bars from different positions all in 3 minutes. I think he must have been specifically practicing his arm bars as this was all he attempted. I noticed whilst rolling with him that he controlled my legs with his own legs which meant I could never get a good base from which to attack from. Now I don’t expect to submit a brown belt but it would be nice to at least make him work a little.

After we finished our roll he said he had gotten an under hook when I got side control which meant he was able to control me easily. I will look on YouTube sometime this week to see if I can find out what he was doing, if not I’ll ask him next week as he seems like a nice guy and this is the second time he has given me some good pointers.

I noticed that a couple of the beginners from a few weeks ago were now sporting nice bright white gi’s and I was approached by Seb to have a roll. When I rolled with Seb previously I commented that he was strong and I basically let him attack me and caught him from my back. For some reason he didn’t look as big as I remembered so I decided that as had about a month’s experience he was fair game so I attacked him and took him down and got nice side control. I passed to mount and he turned over giving me his back. I quickly got my hooks in and went for a gi choke by grabbing his left lapel with my left hand across his neck. Despite cranking it on hard he never tapped so I eventually gave this up and tried for a rear naked choke but he defended his neck well. I then let him roll on to his back but I didn’t let go so I was still in mount. This time I worked my way up his body as I was intending to go for an arm bar but he recognised what I was trying to do so he kept his arms close to his body. Eventually we ran out of time so Seb did a good job defending. Although I was able to totally dominate him I could definitely see an improvement in his grappling awareness.

After I rolled with Ryan I rolled with one of Sebs friends, and like Seb he had a new gi. He attacked a lot more than Seb but he was a bit lighter and once I got hold of him I was able to get a good position and submit him with a couple of Americana’s and eventually an arm bar. He was good though and if it wasn’t for the strength and size difference he would have given me a harder fight.

Before the end of the class I got another roll with Seb and it went pretty much the same as our first roll with the only difference being that I was able to armbar him right at the end.

Because the sparring was brutal and constant quite a few people either left early or sat out a couple of rolls but I managed to go until the end so I’m pretty happy with my fitness at the moment. I did learn from my previous mistake of going for a 4 mile run on the day of training which meant I got cramp in my calves, although I did still manage a cheeky 2 mile run but this was done at a slow pace (18 minutes).

On the way home in the car Oli and I chatted about Judo and the techniques I need to learn to get my Yellow belt. I think once I go back to Judo I will make a concerted effort to drill my Yellow belt techniques as I’d like to get it before Christmas. Not long to go now, which means only 2 more BJJ lessons. Although I do enjoy the BJJ, Judo is my first love so BJJ will have to take a back seat for a while, probably until the next school holidays when my Judo club will close again. 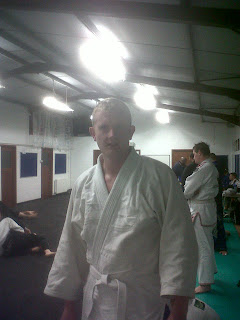 Looking tired but still going after two hours of training